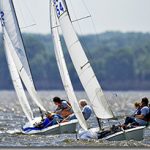 The Lightning is a sloop rigged sailing dinghy originally designed by Olin Stephens of “Sparkman & Stephens in 1938 and was first sailed on Skaneateles Lake, Skaneateles, NY. More than 15,000 Lightnings have been built since then. There are over 500 fleets of Lightnings worldwide, many of which participate in dinghy racing.

Awarded International Class status, the Lightning is sailed in more than 13 countries and in the Pan American Games, and the class provides a professionally managed association that is among the largest in all of one-design sailing. A World Championship is held every two years. North American, South American and European Championships are held each year as are innumerable regional and District championships.

There is room in the cockpit for four to daysail, but a crew of three is employed when racing. On most racing teams, the skipper helms the boat and handles the mainsail. The front crew on a racing team handles the jib upwind and is responsible for spinnaker pole handling downwind. When racing, a middle crew is relied upon for trimming the spinnaker downwind and has boat balance as a primary responsibility upwind.

The Lightning’s is simple, but offers sophisticated sail shape controls. The hull features a hard chine design that combines the stability that provides sail-carrying power, with flat bottom sections that promote planing. The Lightning’s hard chine and 130 lb centerboard give her the stability and power of a small keel boat going to weather in strong winds and allow her to carry a very large spinnaker for breathtaking offwind rides.

The International Lightning Class Association (ILCA) protects the boat’s design and licenses custom and private builders to build boats under its administration.